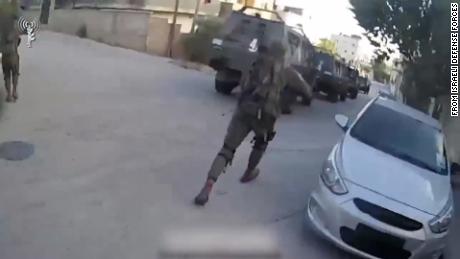 The US Security Coordinator, according to the statement, “concluded that gunfire from IDF (Israel Defense Forces) positions was likely responsible for the death of Shireen Abu Akleh.” That conclusion came “by summarizing both” the IDF and Palestinian Authority (PA) investigations — probes to which the US Security Coordinator was granted “full access” over the past several weeks, Price said.

The US Security Coordinator — who leads an inter-agency team that coordinates with the Israeli government and the PA — “found no reason to believe that this was intentional but rather the result of tragic circumstances during an IDF-led military operation against factions of Palestinian Islamic Jihad on May 11, 2022, in Jenin, which followed a series of terrorist attacks in Israel,” Price said.

“We again offer our deepest condolences to the Abu Akleh family,” he said.

The family said in a statement Monday that they were “incredulous” about the findings and the “notion that the American investigators, whose identity is not disclosed in the statement, believe the bullet ‘likely came from Israeli positions’ is cold comfort.”

Ali al-Samoudi, an Al Jazeera journalist who was shot along with Abu Akleh, said he was “expecting” the inconclusive results and called the US the real “enemy of democracy and human rights.”

Price said the US “will remain engaged” with Israel and the PA and “urge accountability.”

He noted that the examination of the bullet that killed Abu Akleh was “extremely detailed,” and that “independent, third-party examiners, as part of a process overseen by the U.S. Security Coordinator,” were unable to definitively conclude its origin.

Following the US findings, Israeli Prime Minister Yair Lapid said that “the IDF investigation was unable to determine who is responsible for the tragic death of journalist Shireen Abu Akleh, but it was able to determine conclusively that there was no intention to harm her.” Israel, Lapid said, “expresses sorrow over her death,” and he gave his “full and unequivocal backing” to IDF soldiers.

Israeli Defense Minister Benny Gantz said in a separate statement that “it is not possible to determine the source of the shooting — and as such, the investigation will continue.”

The IDF said that the forensic analysis was conducted in a forensic lab in Israel by Israeli experts while US Security Coordinator representatives were present.

“Despite these efforts, the physical condition of the bullet and the quality of the characteristics on it do not enable a ballistic examination to conclusively determine whether or not the bullet was fired from the weapon which was examined,” according to a statement from the IDF.

The Palestinian Public Prosecutor said Monday it was “not true” that the bullet was severely damaged.

Palestinian Authority Attorney General Akram Al Khatib said Saturday that the PA had been given “guarantees” by the US that the bullet would not be given to the Israelis, and did not respond to follow up questions after the IDF said they were involved. The US embassy in Jerusalem told CNN earlier Monday it had no additional comment on exactly who was examining the bullet.

Abu Akleh’s family criticized in their statement the focus on the bullet that killed her, calling such emphasis “misplaced” and “an attempt by the Israeli side to spin the narrative in its favor.”

They also noted that there “were numerous eyewitnesses to the killing, and we have now had the benefit of reports from multiple local and international media outlets, human rights organizations, and the United Nations that an Israeli soldier fired the fatal shot, as there were no other armed elements in the area of Jenin where Shireen was murdered.”

A CNN investigation in May unearthed evidence — including two videos of the scene of the shooting — that there was no active combat, nor any Palestinian militants, near Abu Akleh in the moments leading up to her death. Footage obtained by CNN, corroborated by testimony from eight eyewitnesses, an audio forensic analyst and an explosive weapons expert, suggested that Abu Akleh, who was wearing a helmet and blue protective vest marked “Press” at the time of her killing, was shot dead in a targeted attack by Israeli forces.

CNN is among at least five media outlets that conducted investigations that suggest the shot was fired from a position where Israeli troops were located. None of the investigations found any evidence of Palestinian militants near Abu Akleh when she was shot, or of militants who had a direct line of fire towards her. A United Nations Human Rights Office investigation reached the same conclusions as the journalistic investigations.

Abu Akleh’s family vowed Monday to continue to advocate for her, writing in its statement that to say the US investigation, “with its total lack of transparency, undefined goals, and support for Israel’s overall position is a disappointment would be an understatement.”

“We continue to call on the American government to conduct an open, transparent, and thorough investigation of all the facts by independent agencies free from any political consideration or influence,” the family said.

Two dozen US senators called last month for direct US involvement in the investigation into Abu Akleh’s killing. US President Joe Biden plans to visit Israel and the West Bank later this month.

The family previously said they had not been informed that the bullet was being turned over to US officials.

A US official told CNN prior to the release of the findings that Washington had been pushing the Palestinians to give them access to the bullet that killed Abu Akleh for weeks, and the findings by the State Department come after lawmakers in both the House and Senate called for US government involvement to ensure accountability for Abu Akleh’s killing.

Palestinian officials made the bullet available to US authorities on Saturday. PA Justice Minister Mohammad Al-Shalaldeh told Al Jazeera on Sunday night that US officials had returned the bullet.

This story has been updated with additional details Monday.

CNN’s Kylie Atwood and Tamara Qiblawi contributed to this report.