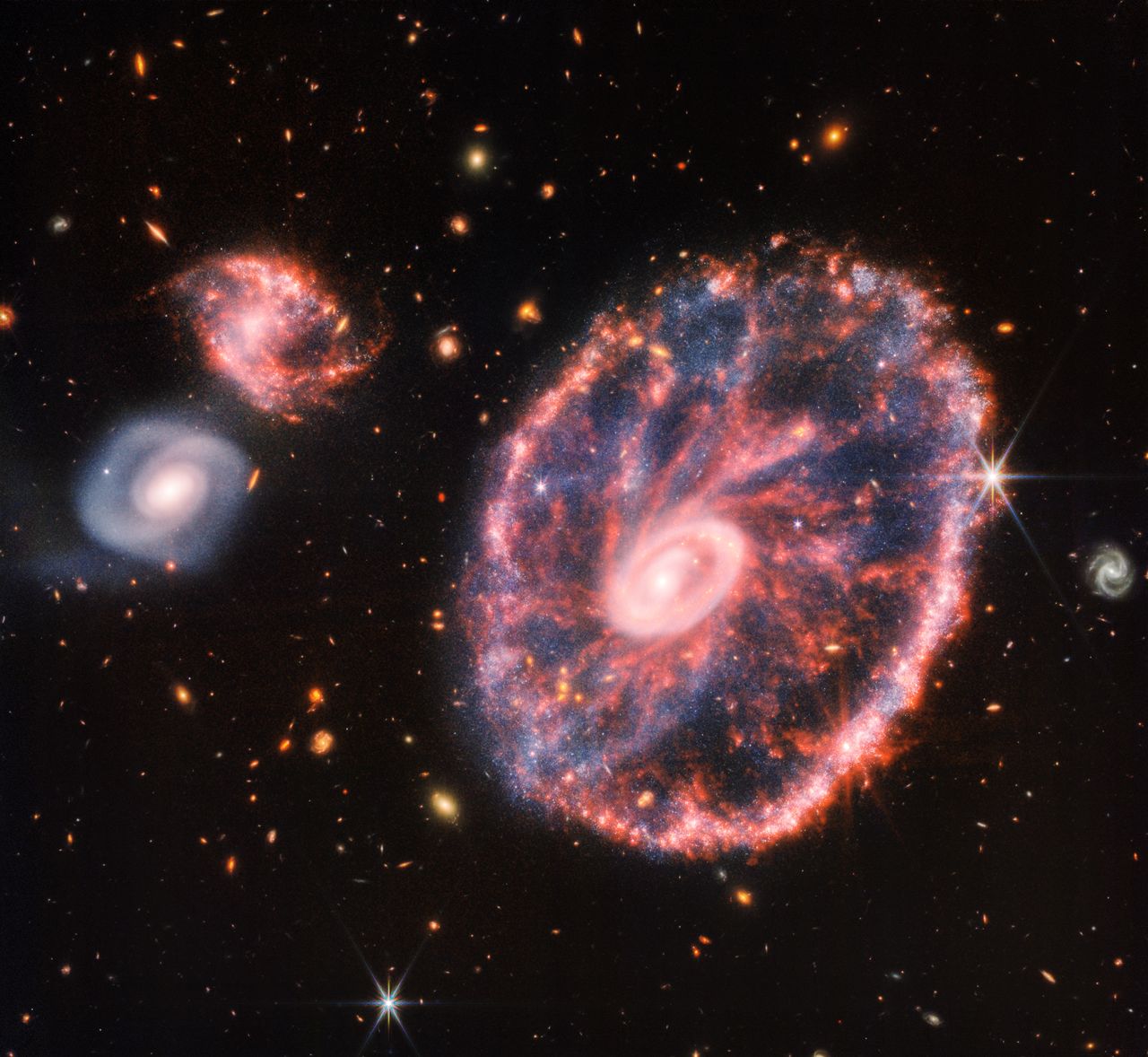 The James Webb Space Telescope retains cranking out pictures of a number of the most uncommon options of deep area.

This week, NASA and its companions launched new pictures of what it known as a “rare” characteristic: the rings and spokes of the Cartwheel Galaxy, some 500 million gentle years from Earth within the Sculptor constellation.

“Its appearance, much like that of the wheel of a wagon, is the result of an intense event ― a high-speed collision between a large spiral galaxy and a smaller galaxy not visible in this image,” NASA mentioned in a information launch. “Collisions of galactic proportions cause a cascade of different, smaller events between the galaxies involved; the Cartwheel is no exception.”

The area companies launched a number of pictures, together with this composite from its the Close to-Infrared Digital camera (NIRCam) and Mid-Infrared Instrument (MIRI):

“The Cartwheel is composed of two rings, a bright inner ring and a colorful outer ring,” the Space Telescope Science Institute, which handles science and mission operation for the telescope, mentioned in a information launch. “Both rings expand outward from the center of the collision like shockwaves.”

These ring galaxies, as they’re recognized, are a lot much less frequent than spiral galaxies, equivalent to our personal Milky Means.

NASA mentioned the intense core incorporates scorching mud and “gigantic young star clusters,” whereas the outer ring ― which has been increasing for 440 hundreds of thousands years ― options new stars forming and supernovas.

“The form that the Cartwheel Galaxy will eventually take, given these two competing forces, is still a mystery,” the Space Telescope Science Institute mentioned. “However, this snapshot provides perspective on what happened to the galaxy in the past and what it will do in the future.”

Right here’s the picture simply from the Mid-Infrared Instrument (MIRI):

“Young stars, many of which are present in the bottom right of the outer ring, energize surrounding hydrocarbon dust, causing it to glow orange,” the Space Telescope Science Institute mentioned in a information launch. “On the other hand, the clearly defined dust between the core and the outer ring, which forms the ‘spokes’ that inspire the galaxy’s name, is mostly silicate dust.”

For comparability, right here’s a Hubble picture of the galaxy captured in 1996: