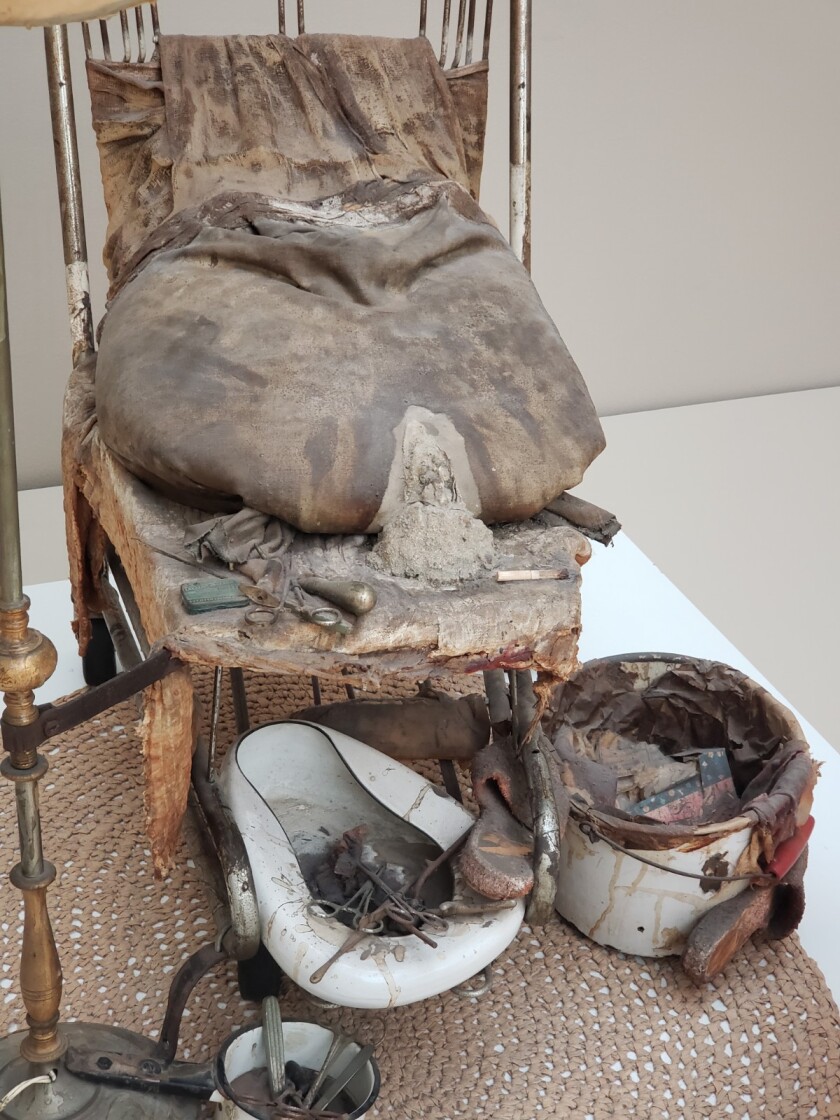 In 1962, when Edward Kienholz made “The Illegal Operation,” the sculpture gave intense visual form to an experience many knew, but one that remained submerged deep in the culture’s shadows.

Abortion was a crime, and the wretched back-alley procedure that the artist witnessed his wife endure was fresh in his mind. (She survived.) The sculptor’s assemblage is sordid in every detail — dirty rags; a soiled bedpan, trash-filled bucket and battered enamel pot piled beneath a shopping-cart chair; filthy medical instruments and tools; a brass standing lamp with its tattered shade askew and lightbulb exposed, the better to illuminate the gruesome job and, at the same time, suggest a threatening police interrogation lamp. In the most shocking element, the woman, Kienholz’s wife, is represented as a gray, ruptured, inhuman bag of oozing matter — a nameless, unidentified lump sagging across the seat.

A homey but stained hooked rug serves as grimy pedestal for the awful tableau. Stepping just outside its margins into the viewer’s space, a grubby pink stool where the abortionist sat is placed next to the patient’s wire seat. The shopping cart’s allusion to a blunt commercial transaction rather than a therapeutic process of medical care is artfully asserted.

When he made the sculpture, the artist was 35. (Kienholz died at 66 in 1994.) His squalid assemblage would eventually end up in the permanent collection of the Los Angeles County Museum of Art, in the city where it had taken shape. Acquired in 2008, it is on view today in the third-floor galleries of the BCAM building. A living moment in time — the present of 1962, when civil rights movements were churning and change from the insulated, socially repressive postwar years seemed possible — is embodied in a work of art that gives form to the callous violence routinely done to desperate women.

Eleven years later, “The Illegal Operation” was transformed. The United States Supreme Court decision in Roe vs. Wade legalized abortion, ruling that unduly restrictive state regulation of the procedure was unconstitutional. Kienholz’s sculpture embodied one legacy of misogynistic brutality that had blessedly ended. Art defining the present became an artifact of the past.

And it remained so for half a century. Then, on June 24, “The Illegal Operation” time-traveled yet again.

Another Supreme Court, this one fashioned expressly as a third political branch of government meant to establish law that the legislative and executive branches would not or could not, overturned Roe. The sculptural present that became the past now describes the future. The inevitability of illegal operations spreads out into the dark and shabby corners of onrushing American life, cheered on by five conservative Christians clad in the blackest of robes, who decided that their religious beliefs should trump medical science and secular law.

Justice Samuel A. Alito Jr. wrote the opinion, which includes imbecilic reference to a notorious 17th century English predecessor most widely known for his ardent belief in witches, whom he condemned to death for wickedness. (The barrister, raised by a strict Puritan father, initially planned to become a priest.) After a draft of the opinion was leaked in the spring, Alito’s misogynistic reasoning was widely dissected and even mocked in aghast legal circles. The opinion was joined by four other justices, all conservative Catholics like Alito, for whom abortion violates their religious faith.

Among them is a man credibly accused of sexual harassment of women, another credibly accused of attempted rape, and a woman affiliated with a charismatic cult whose structure rests on a doctrine of male superiority. In that regard the incisiveness of Kienholz’s sculpture is on scorching display in its cruelest, most devastating image — that gray, oozing lump of nameless matter. Alito’s nasty, hollow abortion opinion barely acknowledges that women will be affected by it, and the artist understood full well how intractable such routine dehumanization could be. As a young man Kienholz had fled small-town eastern Washington for Southern California to get far away from his fundamentalist Christian mother. That the centerpiece of his monstrous scene is a split-open bag of cement anguishes the heart.

Alito and his self-righteous cohorts might as well have been deciding the fate of inert lumps of the sort to which Kienholz gave blistering form. The living, breathing, flesh-and-blood women who will suffer and die at the hands of abortionists have been excised from consideration. The court’s ruling will not stop abortion, as everyone knows, instead terminating abortion safety. The procedure has been turned back into an illegal operation that will kill thousands of people, which only the dissenting justices bothered to express.

Americans don’t want this evil inflicted on them, as every poll shows. Four of the five jurists who made the scandalous decision were appointed by two presidents rejected three times by large majorities of voters. Last week the authorities in effect told Americans to sit down and be quiet.

Do not expect that to happen. Kienholz’s “The Illegal Operation” is powerful for what it so indelibly represents, a ruthless scene of cruelty that can only flourish if hidden away and kept silent. Such is the nature of important art. And such is the purpose of a museum’s permanent collection, where paintings and sculptures sit patiently cared-for as time passes — until, suddenly, a moment calls for them to step forward to shake us by the lapels or take us by the hand.