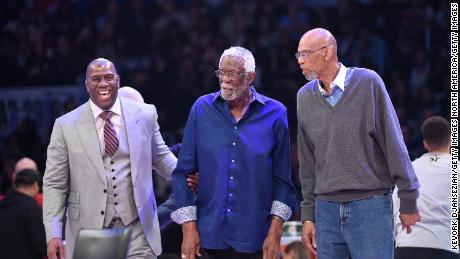 Russell, an 11-time NBA champion with the Boston Celtics and the league’s first Black head coach, died on Sunday aged 88.

He was additionally a distinguished civil rights activist, marching alongside Martin Luther King Jr. throughout the “I Have a Dream” speech in 1963, denouncing racial segregation and supporting Muhammad Ali’s refusal to be drafted within the Vietnam Warfare.

“He became a role model when I realized some of the things that scared me and bothered me about race relations in America were things that he addressed,” Abdul-Jabbar, the NBA’s prime all-time scorer, advised CNN’s Don Lemon on Monday.

“He gave me a way to speak about it that had all of the elements of trying to make something better, rather than just being angry.

“He actually helped me outline that in my life and make selections that have been higher suited to getting constructive change somewhat than simply expressing your anger. He was the precise particular person whose instance must be adopted in that space.”

Abdul-Jabbar first met Russell aged 14 as a freshman at Power Memorial High School in New York City. The pair went on to form a 60-year friendship, during which Russell inspired Abdul-Jabbar as both a player and an activist.

In the late 1950s, Russell accused the largely-White NBA with purposely excluding Black players, while he was also part of the league’s first all-Black starting lineup in 1964.

Despite his supremacy on the court, Russell was also subjected to racist taunts as a player, while his family endured threats, break-ins and vandalism.

“He impressed me to be a greater man by dealing with conditions … with out giving in to the entire anger and rage that he will need to have felt,” said Abdul-Jabbar.

“He dealt with that in a approach that basically shamed the individuals who had tried to inform him to search out the door and go away the Celtics. He saved profitable, the Celtics saved profitable. They usually saved doing it with numerous Black athletes.”

The former Milwaukee Bucks and Los Angeles Lakers star added that Russell was a “banner holder for pleasure for Black athletes,” who “by no means made any of us really feel ashamed or not really feel proud.”

Russell’s 11 championship victories with the Celtics including eight straight titles between 1959 and 1966; he was named NBA MVP five times and an NBA All-Star 12 times, including during his final two years as a player-coach of the Celtics in 1968 and 1969.

“The vandalism that Bill skilled was simply an expression of the anger of people that felt that he shouldn’t be given the chance to be as profitable as he was as an athlete,” said Abdul-Jabbar.

“They resented his success they usually wished to point out him that he had a spot in society that they didn’t respect they usually have been going to place him in his place.

“But Bill was bigger than that and Bill just kept his chin up and kept moving forward. The Celtics kept winning world championships and Bill showed the world what class was all about.”