Banksy Releases Video In Ukraine With A Heartbreaking Mother-Daughter Moment 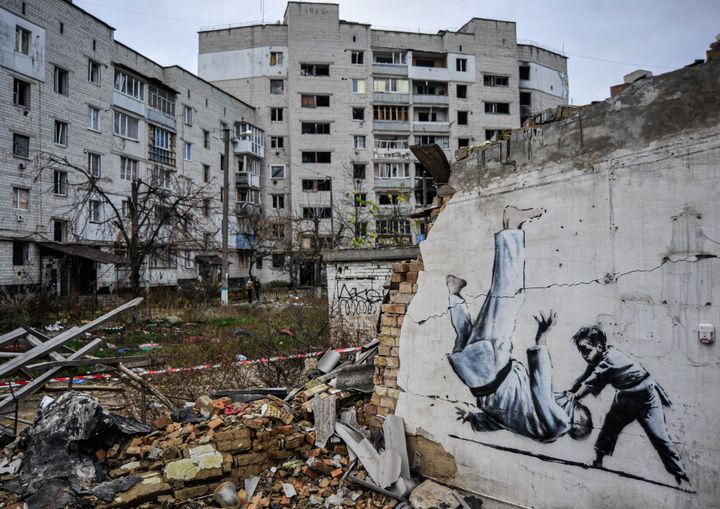 Banksy confirmed being behind seven new items of avenue artwork close to Kyiv in Ukraine in a video posted on Instagram Thursday.

And the 90-second clip contains a heartbreaking second when a mom tells her younger daughter to not cry on the rubble-strewn website of one of many nameless British avenue artist’s murals, which reveals a baby showing to judo-throw Russian President Vladimir Putin, whose military invaded Ukraine in February.

“It was a bomb here and many people died,” the girl says to the digital camera, in keeping with a subtitled translation. “My child used to go to this kindergarten.”

The mom then tells her youngster: “Don’t be sad honey, we already cried so much, we don’t have any tears left.”

The younger woman goes to the touch a bombed-out automotive.

“Honey, don’t touch it,” her mom says, including: “Come and let the man take your picture.”

The clip has been favorited on Instagram nearly 1 million instances.

It ends with an sudden risk as a person sporting an Elvis Presley shirt factors towards one other of the stencils — of a missile launcher showing to fireplace from present graffiti of male genitalia — and, per the subtitled translation, tells the digital camera operator: “For this, I would kick out all his teeth and break his legs.”

A consultant for Banksy didn’t instantly reply to HuffPost’s request for remark.

The paintings seems to poke enjoyable at Russian troops. The video ends with the message: “In solidarity with the people of Ukraine.”